Well, my apologies to those of you eagerly awaiting the second chapter on natural isolates...it just ain't happening yet.
I'm still tiptoeing around them, and my further experiements have so far not yeided anything that I find useful or even that impressive.
Instead I thought I'd write a bit about one of my favourite ingredients:
Cocoa.
I'm a chocoholic. My freezer is full of Lindt Milk Chocolate, (and the latest Aldi knock off which is actually better!), Mozart balls. chocolate covered raisins and more...
(For those of you wondering about the freezer: I live in Australia. If you don't keep your choccies in the freezer, they melt.). Chocolate is my comforter, my pick me up, my sweet and ever sustaining companion through the ups and downs of life. And I love the smell too.....

We know that Chocolate contains all sorts of wonderful ingredients such as antioxidants, and chemicals that act as gentle anti depressants too...
But for these to have an effect, you need to actually ingest the stuff.
So for me as a perfumer, the interesting question is: How does it's aromatic components affect us?
Obviously, for most of us it triggers happy memories from our childhood. But beyond that, there seems to be something so deeply comforting and physically sensual about the stuff that even deodorant manufactureres have started to incorporate it into their latest range! (Though personally, I think they've done a pretty crap job of it. There's only a faint touch of choc to the Linx spray stuff...most dissapointing!) 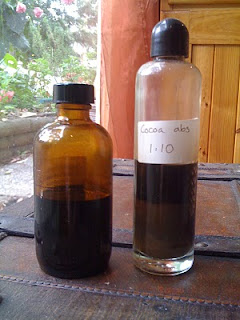 So let's have a bit of a closer sniff as perfumers eh?!
It comes in the form of "Cocoa absolute", a thick, dark brown murky looking liquid that doesn't really dissolve well in anything. It took me a fair while to work out how to use the stuff...This is one of those substances you need to really work at to incorporate in a perfume. And you will always end up with a thick, murky residue that you need to filter out before you can actually add it to blend. I make up two standard solutions of it to work with: One in oil form and one in alcohol. The oil one I actually leave for up to 6 months before I filter and use it, as it seems to take far longer to give it's scent to the oil. And even the alcohol solution needs to stand for some weeks to allow the solid parts to seperate from the solutes.
It's an obvious base note with a goodly amount of midde note to it as well, but very little in the way of obvious top notes.
The scent itself is sweet, bitter, woody and aromatic, with a dark oily depth note to it that you don't notice as much in actual chocolate, and outer touches of a dry powdery note that is a bit orris root like.
Just sniffing it makes me swoon...to me it's a bit like chocolate on steroids. There's something so deep and mysterious to it that seems to go straight to my heart...(and my groin) and makes me want to just dive into it...
It seems to be both deeply soothing as well as incredibly erocitally stimulating, both at the same time.
Which makes it a pretty exciting ingredient to play with really....
Strangely though, most perfumers seem to approach it very tentatively as an ingredient. It always seems to feature as a side or supporting note, mainly in oriental style florals, and almost always with a strong orange or berry note accomanying it.
This always struck me as a bit of a pity, as to me it is such an amazing scent that it should really be given a more starring role, rather than being relegated to the back in such a mistrustful way.....
But then I'm also not a great fan of complicated chocolate recipes in food either. Give me a straight upfront and honest milk chocolate bar or a simple in your face honest to god  mud cake over any of the complicated cointreau truffles and turkish delight messes out there any day. 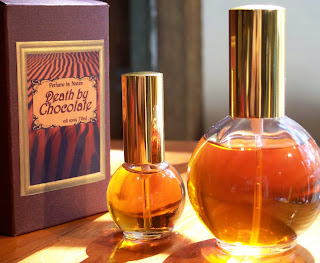 Anyway, once I'd worked out how to get the absolute into a more workable form, I set about finding a way to build a perfume around this beautiful ingredient.
The first Chocolate perfume I created was following my above stated love for the simpler things in Chocolate. I wanted to find a way of making it centre stage with no clever flourishes. But I also wanted it to be a wearable perfume, not a sweet, cheap and tacky thing reminiscent of the many "Chocolate body creams" that are out there. So it had to be chocolately enough to be recognizable, without being sweet and tacky.
As always, the experiments ended up filling a complete shelf of different notes and combinations. All the florals took away from it's elegant simplicity...fruits gave it sharp bynotes I didn't like. And a lot of the woods I paired it with amplified the dry orris root note in a way that was interesting, but not quite what I wanted. In the end, I gave it an Australian Sandalwood base that is less sweet and incensey than it's Indian counterpart. It has an honest warmth to it that gave the cocoa dignity and strength. To this I added just enough spice notes to liven it up a bit, and a lively honey note that aded another layer in the middle and a touch of sweet topnote....
The idea was to find a balance of ingredients that complimented and supported the Cocoa, without changing or covering it up in any way.
And it seems to have worked. "Death by Chocolate" already developed it's own faithful following and been reviewed by a number of different perfumistas. Here's two of them: (There's some more on Perfume By Nature's Facebook page!)

The thing which fascinates me when I first took it to a show to give it a good public testing, is that after the first few minutes, people smelling it would often not identify it as chocolate. It used to amuse me geatly watching women spray it on, and then approach their husbands/boyfriends and ask "What do you think of this?" The reaction was always the saem: "Yum (followed by a neck nuzzle or even nibble), that really nice! What is it?" It seems to have a subliminal effect that isn't directly linked to it's connection to chocolate!
Mind you, there's always a number of people who run way, squealing about how it will destroy their diet and everyone will want to eat them! (This is a bad thing??) 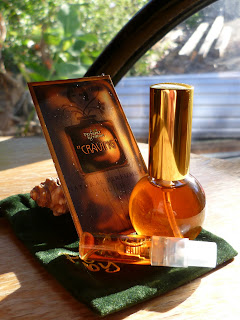 The next Perfume I used Cocoa in was for the great "Mystery of Musk" project run by the Natural Perfumers Guild.
Here I was more interested in Cocoa's Aphrodisiac effect than anything else, so it is not as domonant a note in the perfume itself. In "Craving" I paired the Cocoa with a number of similarly fingerlickingly yummy notes, and some pretty hard hitting musky animalic base notes which brought out a whole diffent aspect of the cocoa scent.
The deep base of Vetiver, Arabian Oud and Excotic Hyraceum had such a punch to them that I could afford to overdose the mid and topnotes accompaniying the Cocoa. Caramel, Vanilla and a delicious Hazelnut all swirl around the Cocoa here, adding a sweet friendliness to the wild animal base.
But even with all the added sweetness, "Craving" is a much deeper and wilder take on Cocoa, and certainly not for the faint hearted, grin!


All up it's one of my favourite ingredients. And my project list for next year includes turning both "Death By Chocolate" and "Craving" into a bath and massage oil version.....chocolate simply cries out to be slathered all over a willing body don't you think?
Posted by Ambrosia at 1:41 PM No comments: