One of my experimental projects this year was in the making of Gardenia Enfluerage. As some of you know, a few years back I managed to track down a small amount of real Gardenia absolute, and made a small batch of a perfume I called "My Gardenia". Which sold out. And to my horror, the supply I had for the absolute dried up and there has been no more to be found ever since!
And I was living out in the bush in Nimbin, norther NSW Australia near a rather large crop of organic gardenias...
So I thought I'd have a go at seeing if I could actually extract the scent myself.
And not wanting to muck around with toxic solvents out in the bush, I decided to try "Enfleurage".
This technique was developed in France a century or so ago, and it involves covering glass plates with a solid oil or fat and laying the petals on them over and over again...each time waiting for up to 24 hours till the scent from the flowers has infused into the fat, and then replacing them with new flowers until the fat has become thoroughly saturated with scent.
Now the problems I faced were many fold. For starters the Gardenia flowers needed to be picked at exactly the right time of day when the scent was strongest. I started off picking them in the morning, but quickly realized the scent was far stronger in the evening. Which meant making sure I was home at the right time to be able to pick them before it got too dark to see both the flowers and any stray snakes that might be slithering around (remember this was right out in the Australian bush). Then it rained and there was no point picking wet flowers as you need them to be as dry as possible while still young and fresh. Then I found out that the bushes were growing right over the nest of a particularly unfriendly form of jumping ant. But eventually, dressed in jeans tucked into sturdy hiking boots and a long sleeved shirt I managed to harvest enough flowers for the first run (with only a small number of ant bites).
Back in the mountain chalet, I hit the next hurdles. Australia is hot in summer. Very hot. And where I was living there was no air conditioning. So any of the fats I tried simply melted off the glass within about 15 minutes.
So I decided to simply immerse the flowers in the melted oil in jars...
Which worked...but I discovered after the first 4 batches failed that I had to immensely careful about timing. If the flowers were left in the oil for too long, first the water content would begin to seep into the oil, and then the whole melange would begin to ferment in the heat. the french instructions of 24 hours were definitely too long!
It was more like a couple of hours with the jars being left in a nice cool spot of the stone floor!
The first batch I did was in coconut. Which worked...but the smell of the coconut was very strong and tended to over power the gentle delicate gardenia, and I was trying to get a strong pure gardenia note all of it's own for my perfume....
So I ended up using a beautiful scentless locally produced macadamia oil which is light and beautiful, plus being environmentally friendly as it's produced in the same hills. 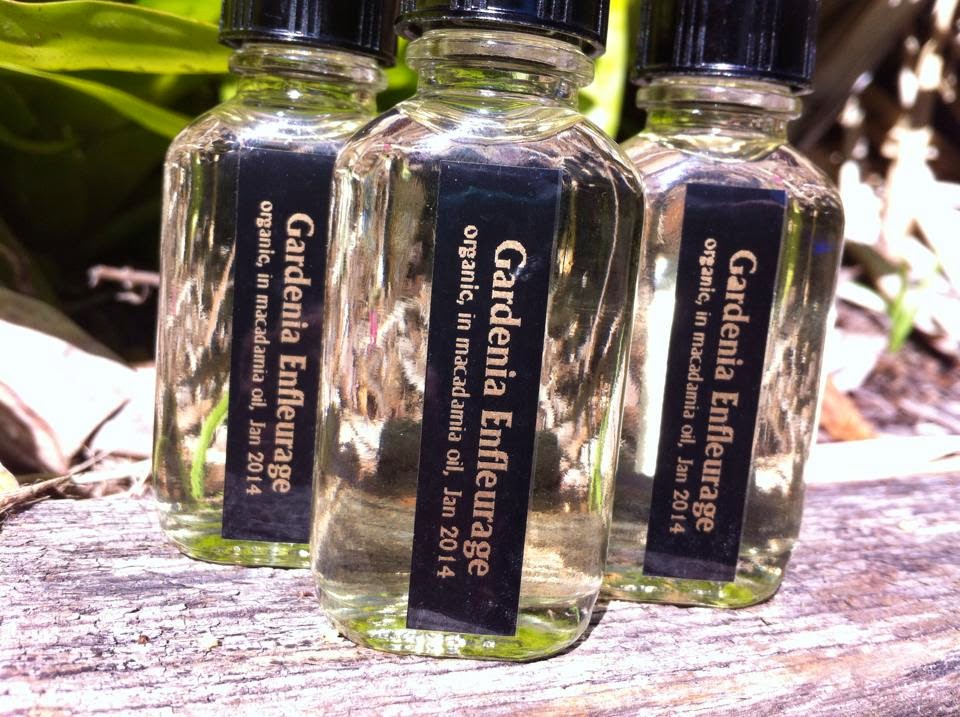 I ran into the same scent strength versus fermentation timing problem over and over....the oil would go from a lovely clear jar full of glowing white flowers dancing in suspension...to a cloudy yellow tinged mess with a distinct fruity smell overpowering the delicate floral gardenia. Which was particularly heart breaking if it was the 4th of 5th run of new petals in a jar.
In the end I ended up with a mere half 500mls of perfect clear delicately scented Gardenia oil! About half of which I have decided to share with my perfumer friends...the other half will be further transformed into "My Gardenia" perfume oil.
So if you'd like to have your own share in this olfactory adventure:


ABC radio rang me the other day to ask if I'd be willing to answer a few questions about perfumery on their afternoon random questions show...."can you bruise perfume by rubbing your wrists together?", "what are perfume notes", "which are the best places to wear perfume?",
And nerve wracking it was too....there I was pacing up and down the courtyard in front of my shop trying to hold the mobile phone steady in my shaking hands...
Hope you enjoy it!

Posted by Ambrosia at 2:23 PM No comments: 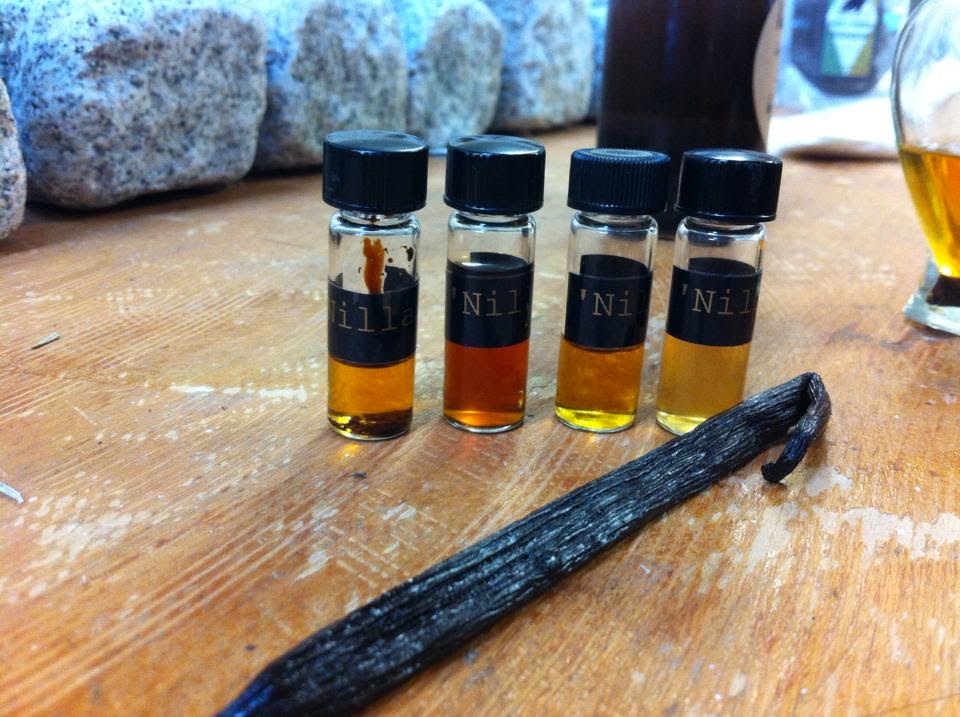 My latest project: A Vanilla perfume.
I've been asked for one so many times over the years...but it's not an easy undertaking.
You see I want it to be a real "pure" vanilla. Maybe with some woody musk ingredients to it, but nothing to mask it or take away from it's basic..well.. "vanilla-ness".
So I'm working with gentle woods, and ambers, and musky smooth bases....
And it's challenging. Vanilla is such a subtle scent...and almost anything seems to overpower it.
Plus the bloody vanilla absolute I like best doesn't seem to dissolve in anything. Argh. 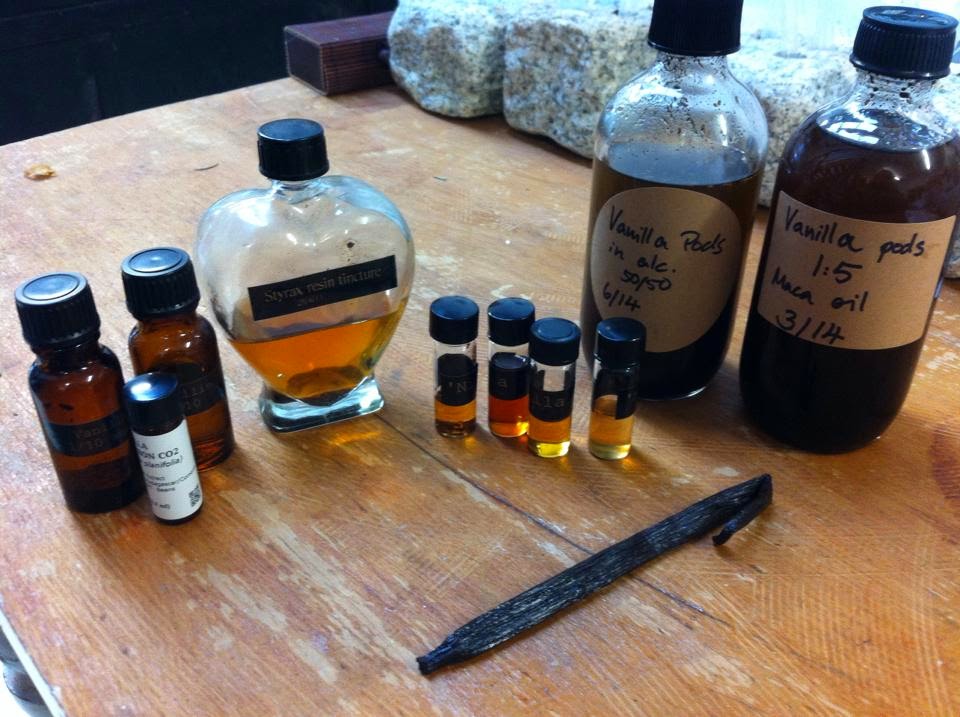 There's so many forms of Vanilla to play with...starting with the fermented vanilla pods themselves which I have incubating in oil and alcohol in bottles all over my shelves...then there's the aforementioned absolute (grr), CO2 extracts, and wonder of wonders, natural vanillin powder! Lovely and subtle to the EXTREME!!!!
Then there's all the "vanilla-ish" other ingredients...benzoin, styrax, tolu balsam, labdanum, peru balsam...but all of them are strong and sweet with sharp overtones I dont really want in the mix.....
So far I'm happiest with a really gentle wood/ musk base which doesn't take centre stage...but it still outshines the vanilla....
We'll see.
Any testers and bloggers out there who'd like a few of the advanced version to test sniff when I'm happy with them?