http://www.perfumebynature.com.au/love_potion.htm
I've been making perfumes and incense for over 20 years. And I have found that one of the most mysterieous, sought after and debated topics in perfumery is aphrodisiacs.
You still see adds all over the place for perfumes and colognes containing "pheromones guaranteed to attract the opposite sex", and let's face it, one of the main reasons we even started splashing ourselves with scented ingredients was in the hope that we'd smell pretty to potential mates!
Most of the surviving ancient perfume recipes are about Love or at least Sex. Cleopatra's famed unguents were part of her weapon arsenal in bedroom politics...Napoleon and Josephine each had favoured potions that they used to perfume their bodies before they met up after each of his bouts conquering other countries...
And then of course we have the famed "Love Potion No 9" from the 60's song that has inspired so many perfumers (including me) to atempt their own olfactory version...
The historical perfume recipes of the 1800's all have bases of various musk components, musk deer glands, civet, hyraceum, ambergris....all of these an attempt to copy the musky component of our own sweat, in the hope of amplifying our own attractiveness....
Scent actually drives the mating rituals of most species, from mammals to flowers and insects even!
Male deer in rut actually drip thick gooey stuff from various glads and leave trails of intensly musky smelly goop on the trees they rub up against...the smell carries for miles through the forest...dogs leave similar scent trails, both maile and female, and it never ceases to amaze me from how far away a male dog can sniff my locked insie the house bitch when she is on heat!
And think about this for a moment: Why do flowers smell pretty? To attract insects and birds to come and dip in their nectar, and carry the pollen containing genes to other flowers!
Flowers are in fact a plants sex organs.
In fact a vast number of the ingredients of perfumery are based on the various aphrodisiacs of the natural world.

So let's have a closer look at a few of them:
The most obvious ones of course are the musks.
The whole birth of modern chemical perfumery was actually triggered by the attempt to create a cheaper and more readily available form of Ambergris, Deer musk and Civet.
And the number of different musks available to the modern chemist perfumer is quite astounding.
The Natural world offers a number of wonderfully musky ingredients too, even without useing the animal based deer musks that bring with them questions about animal cruelty and sustainability: Hyraceum and Ambergris are both animal musks that are actually left behind by the animals.
Hyraceum is a fossilized form of excreta left by generations of small African mammals who pee over and over again on the same place.
It's not easy to get, but it's an amazing substance, animaly and musky and woody, and throughly wild!
Ambergris is a substance spat out by whales that then spends years to decades floating around on the sea purifying, until one day it washes up on the beach to be found by some lucky person who then sells it on for thousands of dollars to avid perumers. Personally, I don't get much off it...it's just dry and faintly resonant of orrisroot and some sort of musky scent...but it does have a fixative effect in perfumes. 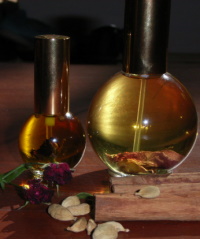 Then there's the spices:
All spices have the effective of getting the juices flowing. They are biological stimulants, designed to heighten our bodies functioning and awaken our appetites...
Of these the ones with the most aphrodisiac effect are Cardamon, Coriander and Cinnamon, Ginger and Pepper. All of them are warming and yummy in food, but in perfumes they add life and warmth and literally "spice things up".
Cardamom is probably one of my favourites. It has a sweetness and depth to it that makes it very sensual...it features strongly in my own offering to the Gods of Erotica: "Love Potion" which was my first spicy Oriental designed to live up exactly to it's name...the idea being that if you felt sexy and passionate, that was the energy you'd give out to the world and attract to you....Kind of my own Aromatherapy version of the infamous "pheromone attractant" perfumes I mentioned above, grin!
Pepper is a really interesting one. It adds bite and Life to florals and fruity blends if you manage to dilute it far enough down.... 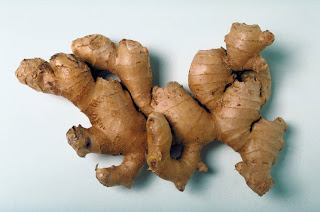 Cinnamon and Ginger are both used in Chinese medicine to warm the body and spirit, and make great additions to any kind of aphrodisiac massage oil (though be careful again to use them sparingly...cinnamon in particular can be too much of a good thing very quickly! but it does definitly stimulate the tissues! Recently cosmetic manufacturers have started adding it to lipsticks to make the lips swell up and look more sexy! so if you take that a bit further down.....

The roots and woods: 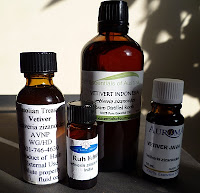 Vetiver is probably the most aphrodesiac one amongst them for me...there is something so deep, pheromoney and wild in a good Vetiver, it makes my skin tingle just smelling it...

Sandalwood is the sweet gentle one amongst the Aphrodisiac ingredients. It has soothing anti depressant properties as well as being sensual and loving. It is elegantly unisex too and blends harmoniously with almost everything
Patchouli is a bit more of a wild child. It's deep, sweet and woody depth is something you either love or hate. For many people it's strong association with the Hippie Era of the 60's makes it either wildly attractive or tacky and "too earthy!". Like Sandalwood, it has been used in Indian Auruveda medicine for centuries to cure depression and other mental imbalances, (as well as repelling moths!) It's one of my personal favourites but it does take some skill to incorporate it harmoniously into a blend without allowing it to dominate.

Another group of sensual scent elements are the Gourmand notes such as Cocoa, Vanilla, Honey, Caramel and Coffee...all of these make our mouths water...and create feelings of increased appetite, Craving and of course eventually, Satisfaction.
The Adult novelty industry sells a number of body butters with both Chocolate and Honey flavouring, and Vanilla is one of THE most popular fragrance notes amongst women. 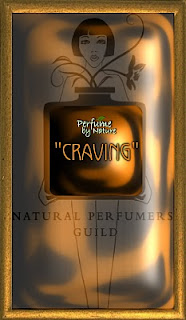 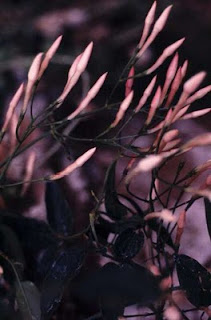 And last but not least, there's the Flowers of Myth and Legend:
Fragrant Jasmine of the Arabian Nights, what could be more magical and sensual? Of all the scents associated with Lov3e and Passion, Jasmine has to be the most well known of them all!
Not many people get to smell actual jasmine though, unless they happen to be into aromatherapy or natural perfumes! As with most of the ancient perfume ingredients, the jasmine in modern day perfumes is made up of chemical compounds made to immitate the original, and many of the perfumes that list jasmine as one of the prominent notes within it, bear only a passing resemblance to the real thing.
There are 3 types of jasmine commonly available, and of the three, jasmine sambac is by the far the most erotic. Real jasmine Sambac has a deep musky quality underneath the sultry intoxicating flower topnotes that grabs you by the gonads. It is one of the sexiest scents that Mama nature ever gave a flower, and the scent of the tiny white flowerswafting around you on a starry summers night is truly intoxicating. Here in Australia the lovely dark green vine grows abundantly up and over verandahs everywhere, so for me it is one of the smells of summer... 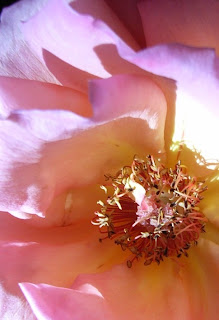 Rose is the true Queen of perfumes of course. One of my first true olfactory loves, some of my earliest memories involve crushing the rose petals of my mothers delicate "Peace" roses in our English garden...the combination of sweet, lemony softness with it's fresh green magic had me sniffing and sniffing as I tried to follow each tantilising magical layer as it appeard adn then faded....
I have a number of different roses in my own garden now, and the difference amongst them ranges from delicately peachy fresh to musky deep and warm....no two roses smell alike, yet each has that undeniably recognizabe "Rose" note to it.
The deepest of all is one I am yet to find in extract form: "Papa Mailand", a deep crimson rose with huge velvet petals and the most intoxicatingly sexy rose smell I have ever encountered.....
I've come close to recreating it with Rose Marroc and a few of the deeper root oils...but I dream of one day distilling this one myself...

So you can see there are many incredibly sensual ingredients a natural perfumer can play with...I hope this has inspired you!


Have a Wonderful Valentine's Day!
Posted by Ambrosia at 10:29 PM 3 comments: