The Search for the ultimate Musk

Like many of you, I love musk.
Of all the Scents in the world, musks are the sexiest. A good musk creates a feeling of desire, warmth and general yumminess both in the wearer and the person smelling you!
After all, they were designed as mother nature's ultimate attractants and sex stimulants for us mammals!
My teenage years were dominated by yardleys "musk oil", musk deodorant sprays and little bottles of various musk perfume oils from Indian clothing stores.
Trouble was they were all artificial.
Natural musk comes from animal sources such as civet cats and the musk deer's anal glands, and harvesting this poor animals glands is an ecological and moral no no.
Which is why (along with price of course!) modern chemistry came up with synthetic musks to take their place. Now the problem with this is that they are not very healthy chemicals. Like most synthetic scent molecules, they tend not to break down. Which makes them lovely and stable in body lotions and deodorants, but creates a real problem once they are absorbed by our bodies. Musk chemicals in particular tend to latch on to hormone receptors in our bodies...and since they don't break down, they tend to stay there and go on stimulating, and stimulating....they also tend to collect in our livers as, not being designed to be part of the bodies biochemistry system, we simply have no way of getting rid of them or breaking them down!
And this is probably the reason why synthetic musks are suspected of contributing to or even causing cancer, in particular breast and ovarian cancer.
The research on this has been alarming enough that a number of governments have begun banning particularly the older musk chemicals, and chemistry labs worldwide are rushing to try and develop alternative and possibly safer musks to replace the ones we now know are so dangerous. 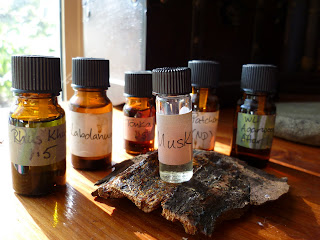 But there is another alternative: Naturals.
Now since I love musk so much, creating the ultimate natural musk perfumes from botanical sources has become a bit of an obsession. I have a large collection of deep base note musky oils and absolutes, and I have been experiementing for quite some time with them...
Mother Nature seems to love creating musky notes...you can find them in roots and woods and particularly in tree resins.
They all tend to be especially musky once applied to your skin...there's something about our own body chemistry that seems to bring out the animalistic note in all of them.
One of my current favourites is Ambrette Seed. This strange essence is made from the crushed seeds of an Indian tree. I originally came accross it many years ago, but had dismissed it after obtaining a small quantity, as it's slightly nutty, buttery scent in the bottle didn't seem at all musk like to me. But when I started seriosuly researching musk notes, I pulled it out again and applied some to the inside of my wrist...and 15 minutes later was astounded to find that it had developed into a sweet, deep musky scent that was sooo animally and, well musky that I was totally overwhelmed! I spent the rest of the afternoon sniffing my wrist and making up test combination with this new found wonder musk ingredient! And it really drove home that you ALWAYS have to try a scent on your actual skin to get it's full effect!
Vetiver is another great musk note to play with. It is renowned for it's grounding, aphrodesiac effects and has a deep, incredibly sexy and masculine velvet to it that I keep coming back to. It's been one of the great favourites in mens Colognes for centuries, and there are more men's scents with "Vetiver" in their name than any other perfumery ingredient! And for good reason!
Then there's Sandalwood, a lighter and more playful but incredibly beautiful oil, that has a smooth musky undertone to it that gets deeper with age. (which is why sandalwood is one of the essential oils that actually get better as they mature...so does vetiver for that matter. Must be some particular part of their biochemistry that evolves into the muskier notes as it ages...
Vanilla too has a musky component to it, as does Tonka Bean and the other great base note: Patchouli!
These are all very sweet notes too, which makes them good if you want a sweet musk scent, but not good if you are aiming at a more masculine musk.
All of the tree resins are musky. Frankincense, Myrrh, Labdanum all share a mesmerizing musk along with their magical incense like properties.....
What all of these have in common is that they are used in Aromatherapy to counteract Fear and panic.
Their soothing base note scents all make you feel safe and comforted, which is a bloody good starting point for any kind of sexual interaction in my minds!
And then of course there's the mystical Oud!  Distilled mouldy tree wood (a very special mould and a very special tree species of course)  to be exact.....and about as famousan aphrodesiac in the arab world as rhino horn and snake wine and all those other wierd concoctions men will imbibe in the hope of growing their potency....Good quanlity Oud will fetch a higher price in weight than Gold.

Interstingly, most of the flower absolutes have a strong musk component to them too. Damask Rose has an incredibly strong musk note in it's base, surrounded by the sweet and freshly tangy notes that rise to the top when you first smell it. Try it on your skin, and see if you can find the musk in the base after 15 minutes or so! We all pay so much attention to the beautiful heart and top notes that the underlying base goes undetected...though our bidies still react to it. Rose too, is known as an aphrodisiac!
Then of course there's the ultimate musk flower: Jasmine Sambac!  The Queen of the SExual Flowers, she gives as a musk to rival deer, civet and all the musk creation of modern day chemistry. A depth and many layered magic that no white coat perfumer could ever hope to rival!

It's been a musky day....I still haven't found my "perfect" musk recipe...I do have an ever growing number of musk accords sitting on my shelves quietly working their magic in ageing together...so I'll keep you posted!

I think I'd better put away all my bottles and go and find a nice fresh pepermint tea to clear my fuzzy warm senses again
Posted by Ambrosia at 5:02 PM