"Happiness" for the "Summer of Patchouli Love"

My own Offering to the "Summer of Patchouli Love" is a perfume named "Happiness".
Why did I choose it for the patchouli challenge?
Originally I was going to start from scratch and create a totally new patchouli perfume...I was thinking I'd go for a floral patchouli, maybe Rose and patch with a touch of jasmine...something deep and sensual that would evoke the 60's indian headshop oils the way most of us remember them....(and also because previous perfume competitions seem to have shown that most women love floral perfumes over everything else!).
I started working on a few variations and they seemed quite promising...but I got talking to a few friends about the project, and one in particular remarked "I really HATE patchouli!". I almost fell on the floor laughing, as she is also a loyal customer of mine who has been buying and wearing my "Happiness" for a number of years now...and it's really heavy on patchouli!! "No way!" she said when I told her this, "I KNOW patchouli and there is definitley NONE of that nasty heavy moldy stuff in "Happiness", I'd KNOW!
So I dug out the recipe and showed her....but it got me thinking....
"Happiness" is actually one of my oldest perfumes...it started it's journey many years ago when I first discovered essential oils. I was suffering through a dark depressing winter in Berlin and looking for oils to use in my oil burner that would cheer me up a bit...I had just been reading about the anti-depressant effects of Patchouli and decided to try it out. I carefully dripped a few drops of the thick dark brown liquid into the buner and was enveloped by a sense of woody warmth....dark, comforting, woody/sweet...it definitely made me feel safer and less dejected...I then added a few drops of lemon oil, as the same trusty book had just told me that this was a good antiseptic to use to ward off colds...and as the two scents mingled, I sat back in amazement! Suddenly there was a beautiful, cheerful scent that was somehow something totally new in the air! These two completely different oils complemented each other amazingly well, and not only that, I found myself suddenly feeling hopeful, almost joyful and well, Happy!
10 years and a whole continent later, I found myself living on a hippie community in Nimbin, Australia. We were flat broke, and I was making up my first ever batch of annointing oils to try and sell at the local markets. And one of these was a blend I'd made based on my experience with patchouli and citrus in Berlin which I'd named "Happiness" which was meant to cheer people up!
I'd added sandalwood to the blend which is another soothing oil from therapeutic point of view, and it was pretty bloody yummy! (note for non Australians: "bloody" is a word commonly used by us Ozzies to describe everything good bad and otherwise. We do not regard it as a swear word, but as normal everyday language usage to replace the word "very".)

The hippie customers at the market seemed to think so too, and my career in scent was born!
As the years went by and the business grew, I played with the recipe and made "Happiness" into bath and massage oils and eventually into an alcohol based eau de parfum version. And it went on selling. My perfumes became more sophisticated as time went by, as I added more exotic flower absolutes, and clever gourmand notes and Chypres to my designs, but "Happiness" remained one of the most popular scents, wherever I went. Men and women both bought and wore it, and even those that went for the deeper sexy florals would often by a small bottle of "Happiness" to wear to work or as a "pick me up" perfume too.
And I think this is one of the things that makes it special.
"Happiness" was one of the first ever "Aromatherapy" perfumes out there. If you read some of the posts that conventional perfume critics have written on the subject of Natural Perfumery, they will use this term in a derogatory manner, as if somehow, the fact that a perfume designed to have positive effect on the body automatically makes it somehow dilletantish and crude. Personally I think they couldn't be further from the truth. I'm a hippie green revolutionary at heart, and Natural Perfumery to me is in essence a form of Cosmetic Permaculture. The art of making a perfume beautiful, organic, sustainable and healthy makes into an even more beautiful work of art in my books. And if the perfumer is skilled enough to make a scent therapeutic as well as delightful in smell.... 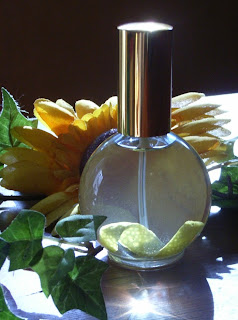 And as I went on thinking about the concept of designing a perfume to embody the spirit of the 60's, I began to wonder if maybe "Happiness" might be just perfect...
After all the 60's were all about changing the world. Bringing back a sense of harmony between Nature and Humans, and also about Love, Peace, caring for one another and well, spreading a little Happiness!
So in the end I decided to submit the very perfume that I had been inspired to make by my own quest for inner Peace.
It's a slightly more sophisticated version of my original annointing oil nowadays... the patchouli is a particularly fine aged one...the sandalwood is a more eco-freindly Australian version from sustainable plantations....the lemon is a soft, fresh green lemon from unripe fruits, with a touch of lime to give it a fresh tang...and theres a tad of spice and a nuance of vetiver to give it body and depth.
But it's still based around Patchouli and Lemon, same as the first drops in my oil burner in Berlin, all those many years ago.
The 60's were all about hope, and humanities adolescant dreams of Peace and Love...
And "Happiness" grew from mine!

I'll be posting what the critics thought of "Happiness" in my next blogpost, and there will also be a number of giveaways you can link to if you'd like to win a bottle of "Happiness" to try for yourself!